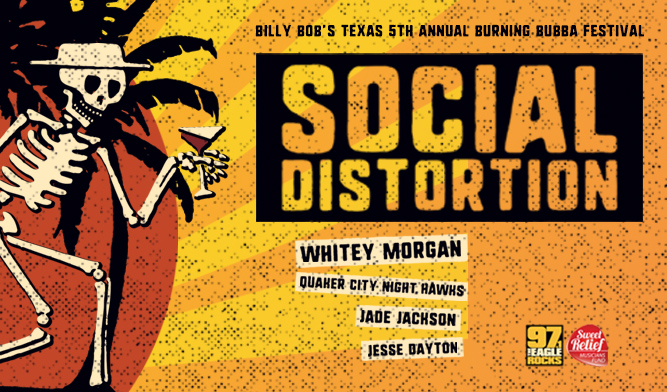 ABOUT SOCIAL DISTORTION: Here’s how you know you’ve made it in the music business: You’ve stayed strong for three decades on your own terms, on your own time, by your own rules, and over that time your influence has only grown. Each of your albums has been stronger than your last. You’ve been brought onstage by Bruce Springsteen, because he wanted to play one of your songs. You’ve seen high times and low ones, good days and tragic days, but every night you give 100%, and every morning you wake up still swinging. This is the short version of the Social Distortion bio — the long version could be a 10-part mini-series. But over the past 30 years, the punk godfathers in the band have all but trademarked their sound, a brand of hard rockabilly/punk that’s cut with the melodic, road-tested lyrics of frontman Mike Ness. Their searing guitars and a locomotive rhythm section sound as alive today as they did in ’82, as do Ness’ hard-luck tales of love, loss and lessons learned. “The most common thing I hear is, ‘Man, your music got me through some hard times,'” Ness says. “And I just say, ‘Me too.'” Hard Times And Nursery Rhymes (produced, for the first time, by Ness himself) is the band’s first record since 2004, but the break hasn’t changed them much. It maintains Social Distortion’s key components — an all-but-perfected mix of punk, bluesy rock n’ roll and outlaw country — but it also finds them stretching the boundaries of their signature sound. “I didn’t want any one style of writing,” Ness says. “I didn’t want it to be all heavy, like “White Light, White Heat, White Trash.” I wanted some heavy and some light. I wanted some fiction and some nonfiction. I wanted versatility.”

ABOUT WHITEY MORGAN: Whitey Morgan is an American Honky Tonk artist from Flint, Michigan. In Flint, the factories are closed, jobs are scarce and the people are bitter. Whitey sings songs these people can relate to. In much the same way his grandfather and mentor did over 3 decades ago, to a whole generation of southern transplants who came up US-23 to Flint looking for the good life. In the spirit of William Morgan, Waylon, Merle and Paycheck; Whitey’s melodies help people forget their problems for a few hours and serve as the guideline for drinking sorrows away.

ABOUT QUAKER CITY NIGHT HAWKS: Quaker City Night Hawks' brand of hard rock n' roll is bred from Texas boogie, Memphis soul and heavy blues. Their music is southern rock right out of '75, played with the fervor of a sermon crackling out of the radio in a '68 Lincoln. They're the whiskey bottle you finished Saturday night and the prayer you said the next morning. Like a country gunshot on a humid night and your first illicit beer, Quaker City Night Hawks are the spirit of rock n' roll. Come shake your hips.

ABOUT JADE JACKSON: Within seconds after a guitar plays the intro to her song “Aden,” Jade Jackson’s voice, illuminated by experience, sings: “I grew up my father’s daughter. He said don’t take no shit from no one. You’ll never see me cry …”And it’s with that voice and those lyrics that imply a thousand stories, this singer/songwriter hints at what she is capable of crafting, of how many tears she can stir in recounting her rambles to the far corners of her imagination, further even than she has actually traveled. For Jackson has spent much of her time in a small California town, working in her parents’ restaurant, jotting down verses and picking out chords during breaks, then venturing eventually to more formal music studies in college before coming back home and startling listeners with the depth and intensity of her music.

ABOUT JESSE DAYTON: Jesse Dayton has been building a cult following around the globe playing festivals in North America and Europe for years with his guitar shredding, country-infused, Americana sound. As a critic’s darling for his first record on Justice Records, Raisin’ Cain (1995), and a number one Americana radio ranking, Jesse was hired at a young age to play lead guitar on some of the last recordings, and play live, by country legends Waylon Jennings, Ray Price, Johnny Bush, Willie Nelson & Glen Campbell and he’s been featured in many guitar magazines. Sensing a shift in the music business climate, Jesse formed his own label in 2002, Stag Records, and began his most prolific recording period. While recording five solo records, one duet record, one live record, all on Stag, as well as two soundtrack recordings (Devil’s Rejects, Halloween 2) for rocker/director Rob Zombie, Jesse managed to act in movies and music videos, produce several records for other artists (the latest being Supersuckers front man Eddie Spaghetti’s “The Value Of Nothing” on Bloodshot Records), write two screenplays, and most recently wrote and directed a new horror movie, “Zombex,” starring Malcolm McDowell, Sid Haig, John Doe, and Lew Temple (“Walking Dead). All while still performing 150 shows per year.