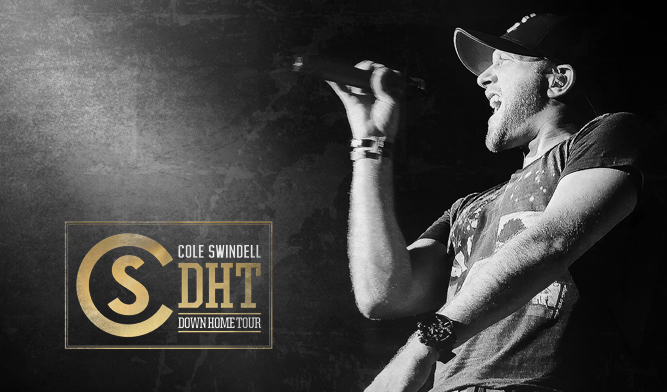 Cole Swindell's Down Home Tour presented by CMT on Tour

Cole Swindell released his second single, “Middle Of A Memory,” from sophomore album You Should Be Here, and within just days was the most added song at country radio. “Middle Of A Memory” is streaming close to 1.5 million streams/week. The multi-week No. 1 single “You Should Be Here,” the debut and title track from his just released sophomore album shot to No. 1 on the iTunes Country chart and Top 10 on iTunes All Genre within hours of its release. The song was the most added at country radio the day it released. “You Should Be Here” vaulted to the Top 25 on Billboard Country singles chart before the song officially went for adds at radio. “You Should Be Here,” his fastest rising single to date hit No. 1 on the Billboard country singles chart in just 15 weeks. It was No. 1 on the Billboard Hot Country Songs Chart (which includes streaming, radio airplay and digital sales) for four consecutive weeks and was a multi-week No. 1 on both Billboard and Mediabase country singles charts. The song already boasts over 50 million streams, 700,000 tracks sold and the video for “You Should Be Here” has more than 24 million YouTube views. Cole Swindell’s self-titled debut album, certified Platinum by the RIAA, includes four back-to-back No.1 singles “Let Me See Ya Girl,” and the first three Platinum-certified singles “Hope You Get Lonely Tonight,” “Ain’t Worth The Whiskey” and “Chillin’ It” making him the only solo male artist in the history of Country Aircheck/Mediabase to top the chart with his four singles. To date, Swindell has sold over 1.4 million total album equivalents in the two years since his debut, including 4.8 million tracks sold and 330 million streams. In 2015 the Georgia native won the ACM New Artist of the Year, was named to Billboard’s Top New Country Artists, awarded CMA’s “Triple Play Award” for having (at least) three No. 1 songs in the past twelve months, and was the only performer to claim the title in 2015. He was nominated for CMA Awards' “New Artist of the Year” and named Music Row’s Breakthrough Songwriter of the Year, with celebrated songwriting credits which include “This Is How We Roll” by Florida Georgia Line, “Get Me Some of That” by Thomas Rhett, and several songs with Luke Bryan such as his No. 1 single “Roller Coaster,” among others. Swindell toured with Jason Aldean, Luke Bryan, Kenny Chesney and headlined his own sold-out “Down Home Tour,” as the inaugural country edition of “Monster Energy’s Outbreak Tour.” He is currently touring with Florida Georgia Line’s “Dig Your Roots Tour.”