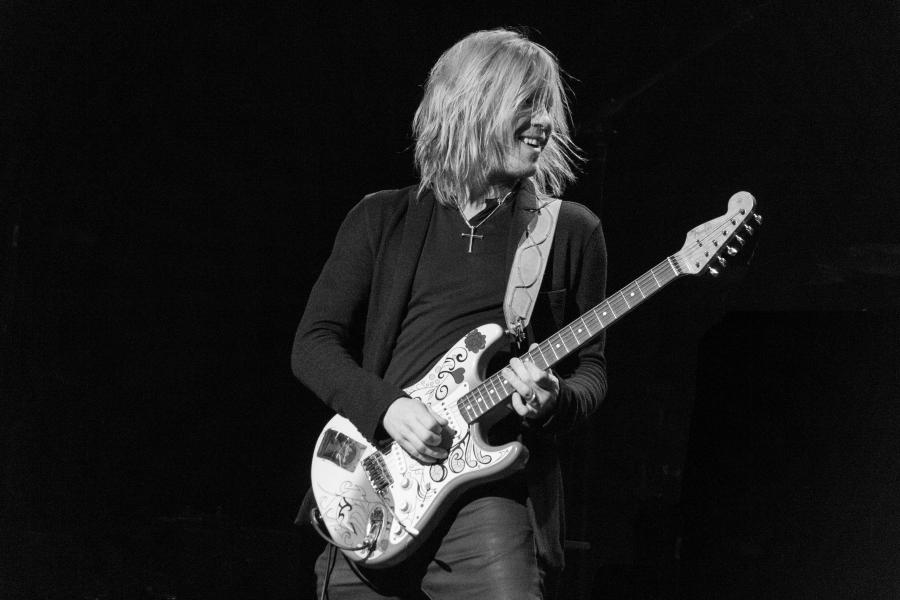 ABOUT KENNY WAYNE SHEPHERD: There are few artists whose names are synonymous with one instrument and how it's played in service to an entire genre. Utter the phrase "young blues rock guitarist" within earshot of anyone with even a cursory knowledge of the modern musical vanguard and the first name they are most likely to respond with will be Kenny Wayne Shepherd. The Louisiana born axeman and songsmith has sold millions of albums while throwing singles into the Top 10, shining a light on the rich blues of the past and forging ahead with his own modern twist on a classic sound he has embodied since his teens. In a 20+ year recording career that began when he was just 16, Shepherd has established himself as an immensely popular recording artist, a consistently in-demand live act and an influential force in a worldwide resurgence of interest in the blues. From television performances on The Tonight Show with Jay Leno, The Late Show with David Letterman, Jimmy Kimmel Live and Late Night with Jimmy Fallon (amongst others) to features in Rolling Stone, Vanity Fair, Maxim Magazine, Blender, Spin, USA Today and more, his musical career has been nothing short of phenomenal. At 16 years old, he signed his first record deal and burst onto the national scene with the release of his 1995 debut album Ledbetter Heights, which produced the radio hits "Deja Voodoo," "Born with a Broken Heart" and "Shame, Shame, Shame." His relentless touring and success on rock radio helped to drive the album to Platinum sales status. His 1998 sophomore effort Trouble Is… also went Platinum, yielding such radio hits as "Blue on Black," "True Lies" and "Somehow, Somewhere, Someway." 1999's Live On spawned the radio hits "In 2 Deep", "Shotgun Blues" and "Last Goodbye." 2004's The Place You're In was a blistering rock record and was followed up by 2007's ambitious 10 Days Out: Blues from the Backroads dvd documentary and soundtrack for which Shepherd and his band traveled throughout the American South and midwest to record with such vintage blues greats as B.B. King, Clarence "Gatemouth" Brown, Hubert Sumlin, Pinetop Perkins and David "Honeyboy" Edwards on their home turf. 2010 saw the release of Shepherd's long-awaited first live album, Live! In Chicago, recorded at Chicago's House of Blues during the all-star Legends tour and featuring guest appearances by such blues legends as Hubert Sumlin, Willie "Big Eyes" Smith and Bryan Lee. The live disc debuted at #1 on Billboard's Blues chart, as did 2011's How I Go. In 2013. Shepherd further expanded his musical horizons by teaming with veteran rockers Stephen Stills and Barry Goldberg to form THE RIDES, resulting in two critically acclaimed albums, Can't Get Enough and Pierced Arrow helped to expand Shepherd's audience as well as his musical resume. 2014 saw the release of Goin’ Home, Shepherd’s seventh # 1 debut on the Billboard Blues charts. Goin’ Home features several talented friends who shared Shepherd's enthusiasm for the project's back-to-basics ethos. Those guests include fellow guitar icons Joe Walsh, Warren Haynes, Keb' Mo' and Robert Randolph, longtime friend Ringo Starr, Fabulous Thunderbirds frontman Kim Wilson, the Rebirth Brass Band and co-producer Blade's father, Pastor Brady Blade Sr., who lends a bracing dose of preaching to Shepherd's version of Bo Diddley's’ "You Can't Judge a Book by the Cover."

ABOUT BETH HART: Beth Hart is on fire. Right now, the Grammy-nominated singer/songwriter is riding a creative tidal wave, firing out acclaimed albums, hooking up with the biggest names in music and rocking the house each night with that celebrated burnt-honey voice. In 2016, the headline news is Beth’s latest album, Fire On The Floor (out 14 October 2016 (Europe / Australia / New Zealand) and 3 February 2017 (US / Canada) on Provogue/Mascot Label Group): a release that even this fiercely self-critical artist describes as “pretty frickin’ good”. But let’s not forget the backstory that brought her here… The Blues Magazine once dubbed Beth Hart “the ultimate female rock star”, and there’s no doubt that her two-decade career is the ultimate thrill-ride. Born in Los Angeles, she released a fistful of hit albums through the ’90s, then reignited in the post-millennium as both a solo artist and the head-turning vocalist for guitar heroes like Joe Bonamassa, Jeff Beck, Buddy Guy and Slash. “Extraordinary,” wrote The Times of her once-a-generation voicebox, while The Guardian praised her “daring, brooding and angry” performances. It’s no wonder she’s been nominated for three Blues Music Awards. But it’s in recent times that Beth has truly blossomed. In April 2015, she released Better Than Home: a critical and commercial smash that topped the iTunes Blues Chart and was crowned #4 Best Blues Album Of The Year by Mojo magazine. The release led her to fill Amsterdam’s Heineken Music Hall with 5,500 fans (her largest club show to date). “Oh, that was so good, man,” she reflects. “I love Holland. They’ve been really good to me.” The US has embraced her, too, packing ever-larger venues in major cities on the Better Than Home tour – including Nashville’s iconic Ryman Auditorium – and receiving a nomination from the American Blues Foundation in the category of Contemporary Blues Female Artist. “It’s unbelievable,” she admits. “This last tour, we were playing much bigger houses than I’d ever played in the States – and they were sold-out.” Meanwhile, on the other side of the pond, Beth’s rocketing UK profile has never been higher. Recent years have seen auspicious headline sets at the Royal Albert Hall and the Barbican (not to mention the historic Hampton Court Palace with Joe Bonamassa), and in December 2015, she chalked up another first with a spot on Jools Holland’s legendary annual Hootenanny. Bringing in the New Year with a soulful take on Tell Her You Belong To Me and Nutbush City Limits alongside long-time collaborator Jeff Beck, it spoke volumes that the pair’s performance rapidly became the Hootenanny’s most-watched clip on the BBC’s official YouTube channel (even overtaking heavyweights like Tom Jones and Paul Weller). “Every time Jeff performs, he just kills it,” gushes Beth, who also joins the veteran guitarist for her first-ever appearance at the Hollywood Bowl this year. “To me, he’s the greatest ever.” Just as memorable, also last December, was Beth’s first solo gig at London’s Union Chapel (subsequently voted by fans as the venue’s gig of the year). “It was the most terrifying experience of my entire life,” she admits. “I got up there and I was so frickin’ scared. But then, halfway through the show, I just started to enjoy it. By the end, I felt so connected to the audience, and I really felt like they did that show with me. It was like we were all the band.” Fire On The Floor is sure to build on her breakneck momentum. The record gave her an emotional release following the bitter-sweet sessions for Better Than Home. Fire On The Floor is the album that Beth Hart needed to make. Likewise, it’s a record that you need to hear. “I’m so pleased with it,” she concludes. “I recently had to organise the sequence of the record, and while I was doing that, I was thinking to myself, ‘Y’know, this is pretty frickin’ good…!’” Beth Hart is going on an extensive tour that will pack houses all over the world. Time and time again Beth has sold out venues in cities as New York, Los Angeles, London, Paris, Berlin, Milan, Amsterdam, Copenhagen, Helsinki, Tbilisi, Sydney and Melbourne. But maybe her greatest live performance to date was seen by millions of television viewers, when her tribute to Buddy Guy on the Kennedy Center Honors Special received one of the only 2 standing ovations of the evening, led by President Barack Obama and his wife, Michelle. Every live performance gets a standing ovation, because no one knows how to rock the house better than Beth Hart. When she sings clocks stop, hearts dance and neck-hair tingles…it’s that compelling!