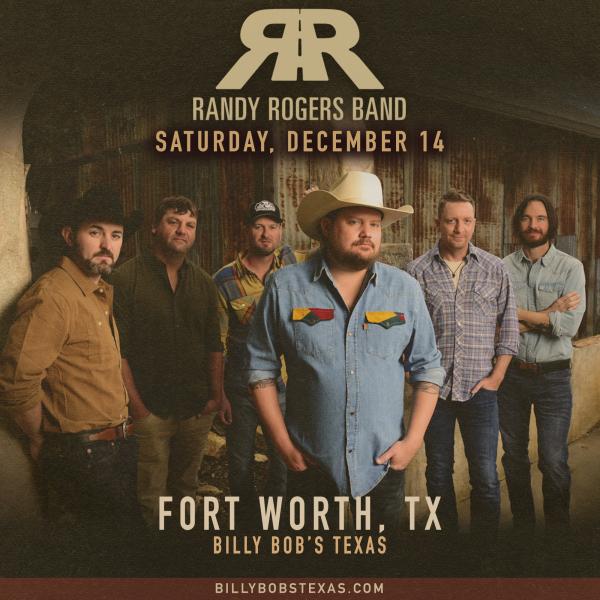 Authenticity isn’t something that can be manufactured in a studio. It’s not a craft that can be learned or artfully practiced. It comes from living life. It’s the byproduct of blood, sweat and tears and as the foundation for music, it elevates mere entertainment to compelling art. Every note, every word on the Randy Rogers Band’s new album Nothing Shines Like Neon rings with authenticity that makes each song linger with the listener long after the music fades.

“You’ve just got to be true to yourself and you can’t fool anybody,” Rogers states matter of factly of the band’s philosophy. “As a whole, our body of work is pretty consistent to our live show and the band that plays on the record is the band that you go see.”

The same line up has been performing together since 2002 and  the music has evolved as they’ve soaked up life experience. “As men we’ve all matured and lived a lot of life together,” Rogers says. “We’ve had a few breakups happen to us. We’ve had babies. We’ve had life changes. We’ve been on the road 200 shows a year. I’ve been in this band 15 years so a lot has changed.  I still listen to Merle Haggard every night. I mean that hasn’t changed, but a lot has changed for us musically and privately.  We all are in a good spot and we all are just as good friends as when we started.”

Camaraderie and creativity have made Rogers and bandmates Geoffrey Hill (guitar), Johnny “Chops” Richardson (bass guitar), Brady Black (fiddle), Les Lawless (drums) and Todd Stewart (utility player) one of the top bands on the competitive Texas music scene.  Nothing Shines Like Neon continues the momentum established by the band’s four previous albums—Randy Rogers Band, Burning the Day, Trouble and Homemade Tamales, each of which went to No. 1 on iTunes.  Earlier in 2015, Rogers joined friend Wade Bowen to record the critically acclaimed album Hold My Beer Vol. 1.

Produced by Nashville legend Buddy Cannon (Willie/Merle) at Cedar Creek in Austin, RRB’s news album Nothing Shines Like Neon showcases the band’s taut musicianship as well as Rogers’ earnest vocals and insightful songwriting on such instant classics as the groove laden “Rain and the Radio,” the heartbreak anthem “Neon Blues” and the playful “Actin’ Crazy,” a duet with Jamey Johnson. “Jamey and I wrote that song together,” Rogers notes.  “I met a movie star a few days before Jamey and I were going to write. I was in LA playing at the House of Blues and he came out to the show. I was thinking about him …and thinking about being a struggling actor living in LA and having to put up with all the bullshit that LA is.  I just wrote that song about him.”

The album opens with the fiddle driven shuffle “San Antone”. “That is a Keith Gattis song. He wrote by himself. Being from Texas and living so close to San Antonio, I don’t think that song is going to hurt me at all,” Rogers laughs.  “It’s one of those songs when I heard it I was like, ‘Oh hell! Why didn’t I write this song?’”

“Takin’ It As It Comes” features Lone Star legend Jerry Jeff Walker. “I’ve been a big fan of Jerry Jeff’s all my life,” Rogers says.  “He came in the studio with us, got in there with the band, jumped around and played guitar and sang. We had a great time.”

“Rain and the Radio” is Rogers’ homage to Ronnie Milsap. “I wrote that with Sean McConnell.  He and I have written a lot of songs through the years.  I’ve always been a huge Ronnie Milsap fan and to me that song has a little Milsap feel to it, kind of a bluesy country thing, which we haven’t done before.  Any artist that I look up to always tries to create something different and pushes the envelope a little bit.  I think we do with that song in particular. It’s very country. It’s just very different.  As a band, we’re trying to broaden our horizons and I don’t think that’s a bad thing.  If we were all just stuck doing the same old thing, we would all be bored. We probably wouldn’t still be here.  It’s just a matter of spreading your wings a little bit.”

“Look Out Yonder” is a poignant tune Rogers recorded in honor of his mentor, the late Kent Finlay. “Kent gave me my start in the music business.  Up until the day that he died, we talked about songs and about music,” Rogers says. “We actually named the record, Nothing Shines Like Neon after a lyric in one of his songs as a tribute to him.  Alison Krauss and Dan Tyminski are singing on ‘Look Out Yonder’, which was written by Earl Bud Lee, who is most famous for writing ‘Friends In Low Places’. He and I have been friends for 10 years and he has always wanted me to cut that song. I’ve never had a record where it fit and just thinking about losing Kent and Kent going to heaven and joining his mom, ‘Look out yonder coming down the road’ it just fit. I haven’t performed that song yet live, but I know I’m going to have a hard time getting through it.  The day we started our record, I got a call that Kent passed away so this record is definitely dedicated to Kent.  That song makes me think about all of us musicians and how we are crazy as hell and lead the most unorthodox lives. Most of us return back to our roots, so hopefully this is an album that glorifies Kent’s life and is also a nod to the traditional sounds that we all grew up loving.”

A native of Cleburne, Texas, Rogers grew up addicted to traditional country music. “I wanted to be George Strait when I was in the sixth grade,” he says with a smile. “And I grew up listening to Willie Nelson and Merle Haggard, I’ve listened to them more than anybody else, my whole life.  I always liked songs. I always wanted to find out who wrote the songs and what the songs were about.  I always liked the art and the craft of being a songwriter. My dad’s Beatles records got played a lot and Michael Martin Murphy is another one I listened to a lot as a kid. My dad was a huge fan.”

Like many artists, Rogers got his start performing in church and then expanded to local venues.  “I could write a song when I was pretty little, 11, 12 or 13,” he says. “It’s like a kid who could do calculus or something. It was just something that clicked in my brain for me.  I went and finished college and got a degree in public relations and then started a band.”

Since then the Randy Rogers Band has steadily built a following that has spilled beyond their native Texas. For the past 10 years they’ve recorded for Universal Music Group, but on Nothing Shines Like Neon, Rogers again takes the reins, releasing the album on his own Tommy Jackson Records, named after a song he wrote for their very first album. “It’s a very obscure Randy Rogers Band song and to this day there is always this one drunk kid at a show that says, ‘Play “Tommy Jackson!” Play “Tommy Jackson!”’  It’s kind of a running joke within our band. It’s like, ‘How in the hell did this kid in Iowa City, Iowa remember that stupid song “Tommy Jackson?”’  It’s about a guy who is on the run from the cops, wanted for murder.  It’s a story song and we just felt like it was a unique way to name a record label.”

Nothing Shines Like Neon is a stellar collection in an already impressive body of recorded material that owes a lot to the band’s potent live show. “You come to a show, you know what you’re going to get,” Rogers says. “We’ve worked hard at making ourselves better on stage and we care about our live show. It’s a way to come out and unwind, and we’ve stuck to writing songs that are about real life, about breakups or divorces, falling in love or babies being born, and in the case of this record even death, the ups and downs of life. People can relate. That’s what country music is supposed to be.  Our band has been around for a long time because there’s no bullshit to us. We’re not in it to be rich and famous. We’re in it to make a living, provide for our families and do something that we all love.  You can’t fool people and we haven’t ever tried.  I think that’s the key.”