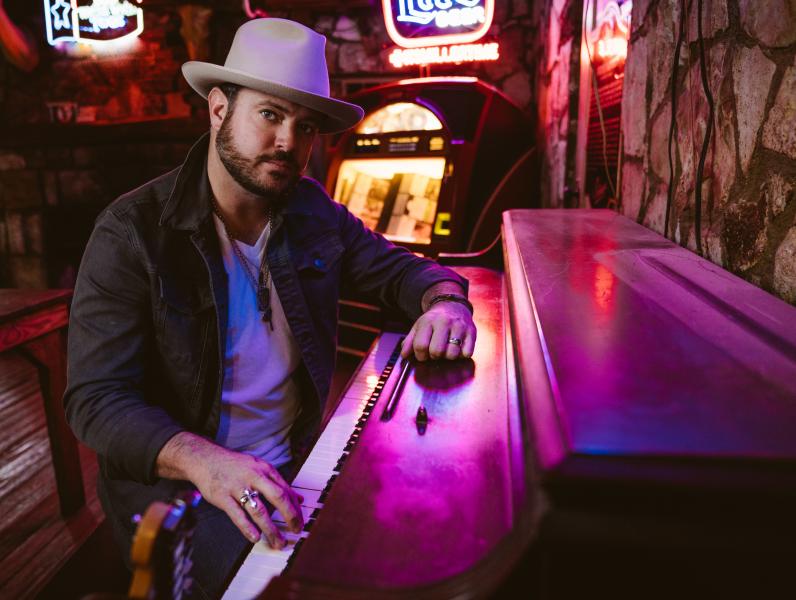 ABOUT WADE BOWEN: Every story has a next chapter and for Wade Bowen, this new self-titled album, is it. Wade Bowen marks a new beginning, the turning of the page to a place where the music becomes a little bit freer, a little bit looser, and a lot more intimate. This is the sound of catharsis, of Bowen released from major label bonds to find himself on his own again – ragged from the storm, but finally, back on shore. In short, this is the real Wade Bowen. Bowen has sold over 300,000 album in his short career, sung duets with the likes of Will Hoge (“Another Song Nobody Will Hear”) and Brandy Clark, (the duet of “Love in the First Degree” on the successful comp “High Cotton: A Tribute to Alabama”), and been featured on compilations alongside the likes of Charlie Daniels, Old Crow Medicine Show, Eli Young Band and The Blind Boys from Alabama. His Wade Bowen Classic golf tournament has raised over 1 million dollars to benefit children’s charities across central Texas. And now, after 15 years of near constant touring, (sometimes up to 250 nights a year), through hit albums like, The Given, and hit tracks like, “Songs About Trucks,” Bowen has continuously grown and evolved, becoming the man on this incredible new record.

Welcome Bowen the balladeer, the storyteller, the guy who sings from the heart. “This was a whole new approach,” explains Bowen of the making of this newest album, his 7th to date, “Probably what I love most about this album is the search I went on to go out of my norm and write some songs that were out of my comfort zone. I guess you could say I was more selfish on this record. I wanted everyone playing on this to feel willing to explore, to go as far out as they wanted to. I wanted to go back to the way we all played when we were kids in garage somewhere, playing just for the pure fun of it. “Sometimes, starting new, means going back to where you began in the first place, where music was played straight from the gut, for the sheer and beautiful joy of it.

Wade Bowen was made without the burdens that come with big business or the pressures to fit in any kind of particular box. This is simple, American-made Americana, dreamt up on the road and played in the company of good friends. “The focus was to talk about what I’ve been through. To get personal,” Bowen says of writing these new tracks, “everything I’ve been through lead me to this. I needed to get stuff off my chest in a way, to be free and to be playing music for the right reasons. This album was about getting friends involved, about getting on the road and trying to inspire people.” Recorded his own way, Wade Bowen sounds more like a casual gathering than a stiff studio session. The players have space to breath and room to explore. You can hear it in the big guitar thrusts of “When It’s Reckless”, co-written with Will Hoge. “When I heard Will for the first time, I always wondered what a co-write between us would sound like,” says Bowen. “Finally, here it is.” You can hear it in the gritty sway of “Honky Tonk Road” a track Bowen first heard performed by Walt Wilkins and the Mystiqueros and “fell in love with it. Walt has always been one of my favorites anyway. They took this Ray Stephenson song and made it their own and from the first time I heard it I imagined how fun it would be to get some buddies together to sing it with me. Remember back in the days when multiple artists recorded a good song, over and over? Well…”

On covers like this one, as well as on the album’s vibrant originals, Bowen and his band manage capture all the raw energy of a live performance, while taking us on a wild ride down the highways and byways of a lost America. “It was about the energy,” says Bowen, “I wanted this record to be unique from everything else I’d done. It is rawer record than I’ve ever done and it has more of a free spirit. I want you to feel like you’re in the room with us when you’re listening to it.” With Wade Bowen, he rolls with us onto wide-open roads and into territory both fresh and familiar. You can hear a host of influences here, old school rock’n’roll, classic country, and singer-songwriter confessionals. But the thematic glue that holds the album together is the idea of moving forward, of moving on, of following that arrow of black pavement that links one experience to the next. Tracks like “Drive and “Wander” are songs born of hot asphalt, of the sky spread out big and blue. “California” and “Leola” carry traces of sweet nostalgia and the kind of yearning that aches deep in the chest. “Gonna Go” is darker, grittier, following the beat of the road, that dotted yellow line pulsing into a lost horizon.

On “West Texas Rain”, with Vince Gill guesting on vocals, Bowen gives a nod to his early days in his home state, a place, “where I started playing music and figuring life out. I’ve always felt that as a writer, sometimes the best thing to do is just be as honest as you can and everything seems to work itself out. This song is a story of life and love and learning and anyone who knows West Texas as all knows, if you don’t like the weather, stick around cause it’ll change before you know it. Live your life. We are only here for a little while.”

“I wrote the album over a few years time,” explains Bowen, “but when you gather these songs together, there always seems to be a theme you didn’t see before. A lot of them are about being on the road, about the life I’ve been leading. I listen to this record and my life comes through, and ultimately, without trying, the songs all ended up feeling right together.” Take a listen. The tracks on Wade Bowen feel as familiar as old denim, as comforting as an old friend – back again after a long time gone. This is an album that has Bowen both returning to his roots…and pushing ahead into strange new lands. These are songs made of memories, regrets, redemption and the promise of a next chapter too – those adventures that still await, just up around the next curve.